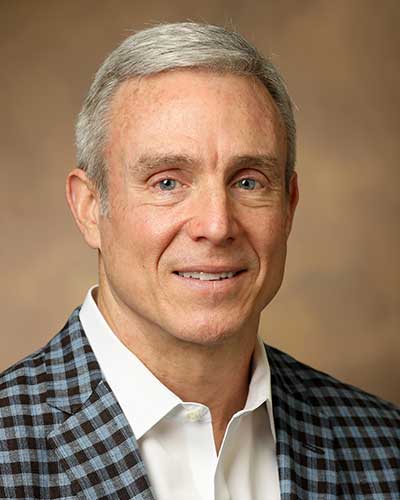 Professor of Medicine and Critical Care

Dr. Ely, the Grant W. Liddle Chair in Medicine, is a sub specialist in Pulmonary and Critical Care Medicine who conducts patient-oriented, health services research as a Professor of Medicine in the Division of Allergy, Pulmonary, and Critical Care Medicine at Vanderbilt University Medical Center in Nashville, TN. He is also a practicing intensivist with a focus on Geriatric ICU Care, as the Associate Director for Research for the VA Tennessee Valley Geriatric Research and Education Clinical Center.

Dr. Ely’s research has focused on improving the care and outcomes of critically ill patients with ICU-acquired brain disease (manifested acutely as delirium and chronically as long-term cognitive impairment). He is co-director, along with Dr. Pratik Pandharipande, of the Critical Illness, Brain Dysfunction and Survivorship (CIBS) Center, which consists of over 90 investigators from Departments of Medicine, Surgery, Neurology, Anesthesia, and Psychiatry.  The CIBS Center has amassed thousands of patients into cohort studies and randomized controlled trials, who together built the methodology for ICU acquired brain disease research and newly adopted treatment paradigms including the ABCDEF Bundle.  His team developed the primary tool (CAM-ICU, translated into 35 languages) by which delirium is measured in ICU-based trials and clinically at the bedside in ICUs worldwide.  Dr. Ely has been continuously federally funded (NIA and/or VA) for nearly 20 years and is now embarking with the CIBS Center and Rush University Medical Center on the NIA-funded BRAIN-ICU-2 R01 to establish a brain bank and determine the exact nature of post-ICU Dementia.  Dr. Ely has over 400 peer-reviewed publications.

Dr. Ely graduated from Tulane University in New Orleans, Louisiana, Summa Cum Laude, with a BS in Biology in 1985. He continued at Tulane to receive his MPH in Public Health, graduating in 1989. He completed his medicine residency program and his postdoctoral fellowship in Pulmonary and Critical Care Medicine in Winston-Salem, North Carolina at Bowman Gray School of Medicine. However, he will be the first to say that his most amazing accomplishments are his three daughters, Taylor, and twins, Blair and Brooke Ely. His wife, Kim Ely, is an Anatomic and Clinical Pathologist who specializes in Head and Neck Cancer pathology at Vanderbilt University Medical Center in Nashville.